Home » Antarctica Series » What Lies Beneath

Hanging out with scientists is really fun. I spent the afternoon with a team studying sea spiders. They dive under the 8-foot thick ice sheet to observe the behavior of spiders that seem to grow bigger in the cold water than their counterparts do in more temperate and tropical waters. The Antarctic spider’s version of “gigantism” means that to about the size of a human hand rather than others around the world that never exceed the size of a quarter. 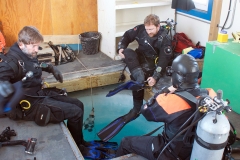 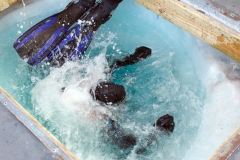 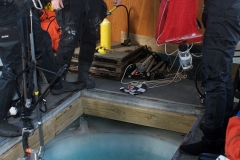 While the dive team explored the bottom of McMurdo Sound, I climbed into a tight observation tube to watch them work. The tube offered the luxury of entering this world without the discomforts and dangers of scuba diving in such cold waters.

Unlike the barren surface of Antarctica, the world under the ice is a noisy, almost urban conglomerate of plants and animals. The bottom dropped steeply from the shore into the 80-foot depth. While surface ice was flat on top, it had inverted hills and valleys hanging underneath. The water glistened with a mixture of flakes of bottom of ice and tiny swimming snails called “pteropods.” The sea floor is carpeted with sea spiders, sponges, and sea urchins all going about their business. The sea urchins like to “clothe themselves” with everything from dead spiders to other underwater debris. “Dressing for success” is evidently not only a human habit.

I was also entranced by the choreography of the bubbles rising from the divers. In every direction, I watched fleeting images of pure beauty find their way to the underside of the surface ice. 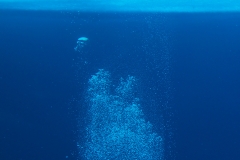 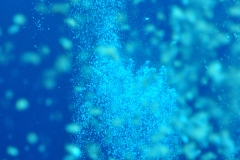 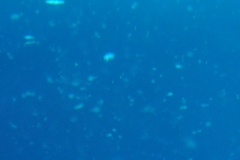 The divers made two dives. In between they returned to the dive hut to change their air tanks and to warm up from the frigid water. While we were sitting around the dive hole and chatting over coffee and peanut butter cookies, one of our underwater neighbors decided to pay a visit. This 700-pound seal poked his head up to grab some air but decided to stick around for a little while. He was a welcome contributor to the conversation. We had little else to talk about for the rest of the day.