I spent a day with the penguins yesterday. After a short helicopter ride with Elaine and the science fiction author Kim Stanley Robinson, we arrived at Cape Royds. This is home to another early 20th century hut used by the explorer Ernest Shackleton. It is also home to a penguin rookery of about 6,000 birds. The helicopter landed about 40 feet from a small scientific shelter and 2 tents. We were quickly met by Jean and Katie who watch over the hut and study these beautiful birds. They live in tents on the volcanic rock. After pulling our gear, supplies, drinking water and the mail from the helicopter, they welcomed us into the shelter with hot coffee. Trying to be good guests, we brought gifts including a bottle of wine and some shrimp leftovers from the galley from McMurdo.

The coffee and their hospitality immediately took the harsh edge off of the icy wind. Once we were properly warmed, Jean led us on a brief hike across this lunar landscape to Shackleton’s Hut. The hut resembled the Discovery Hut near McMurdo although it is, generally, in better shape. It was another reminder of the courage necessary to endure such cold and uncertainty in exchange for personal fame and national honor. Jean said that Secretary of State John Kerry visited last week. He was pleased to see a 100-year old bottle of Heinz ketchup on the shelf in the hut. His wife comes from the Heinz family in Pittsburgh.

While Elaine and Stanley stayed at the hut, Jean and I hiked to the rookery. My main job was to record audio samples of penguin chatter for my music project, but Jean gave me what equaled a 3 credit college course in penguin behavior. Springtime is the dating season for penguins, although a handful of couples already have eggs. The males choose a spot for the nest (about 18 inches in diameter), then flap their flippers and sing to any passing females. The females leisurely walk around the crowded landscape window-shopping for a husband. The male dating strategy seems to be…1) secure the real estate then 2) get the girl with a song and a dance. Evidently, males with low voices are more attractive. Some of the couples that already have an egg share the parental duties. They take turns caring for junior and searching for food. I watched a mom handing off the egg-sitting duties to dad. She made sure that the dad positioned his feet in exactly the right place. She checked several times to ensure the egg was fully covered. No detail was left to the husband’s discretion. 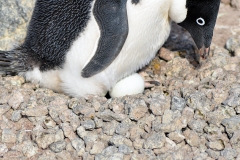 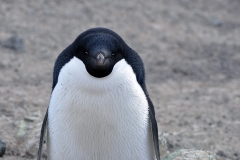 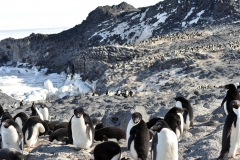 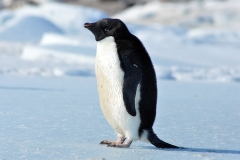 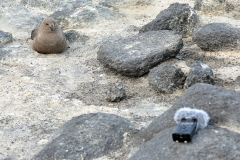 Another member of the community is the skua. This is a predator/scavenger with about 3-4-foot wingspan that survives by eating penguin babies or nibbling on dead ones. My TASCAM audio recording device, with its fur windscreen, looked like a tempting lunch for one curious skua. I snagged it before he did. Had he carried it off, we both would have been very disappointed.

The rookery is filled with a symphony of different penguin voices. It is a sound of pure, raucous joy. I managed to fight off the extraneous sounds of the wind to grab some good penguin songs. Lots of the males were singing for the ladies. Others were arguing over the real estate for their nest. An occasional purr would rise up from the more relaxed birds. They went about their business with little concern for the big hairy bird with the glasses and the red parka (not the tuxedo) sitting close by. Throughout the day, some curious birds came over to figure out if the furry windscreen of my TASCAM was my little hatchling.

I can see why Jean and Katie live on this volcanic rock. Their courage and endurance is not born out of the heroic nationalism of Scott and Shackleton but rather the humble commitment to Science in general and these birds in particular. They sleep in tents in subzero temperatures and howling winds to be with these birds, to learn about them, and to learn from them. They painstakingly search for the truths that weave these penguins into the tapestry of the ice, the water, the snow, the land, the sky, and eventually to us. That requires a level of quiet, joyful perseverance that I am incapable of matching.

Please take a look at the good work by Jean and Katie at www.penguinscience.com

5 Responses to A Symphony of Penguins