I spent the day out on the snowmobiles with Elaine and fellow NSF Artist and Writer, Maris Wicks. Maris is a science cartoonist (www.mariswicks.com). While I was recording their voices, Maris was sketching. The Weddell seals make a wide range of sounds both above and below water. Everything from guttural growls and purrs to a high pitched squeal that sounds like a special effect from a 1970’s science fiction film. I could hear also a sawing sound as they chewed breathing holes in the sea ice. One mother and two pups had a long and rather heated conversation about whether it was nursing time or not. The mom was not impressed by the constant complaining of the pups.

Adult Weddell seals weight about 1000 lbs. About 4 inches of blubber encircles their body for protection against the cold. The pups weight about 60 lbs. at birth and quickly grow to 150-200 lbs. during a couple weeks of nursing. Meanwhile, the mother seals lose up to 40% of their body weight during the same period.  Moms make enormous sacrifices for their children, no matter what the species. 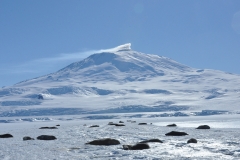 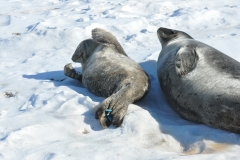 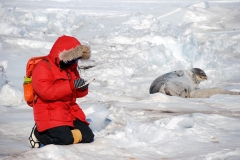 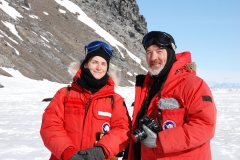 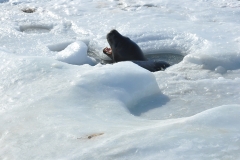 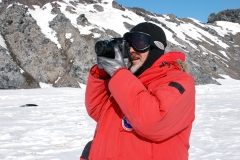 When the seals are not diving for fish, they emerge through the sea ice to dry off and warm up. It is common to see large groups of seals gathered around cracks in the ice, lazily passing the time in the constant Antarctic sun. They barely took notice of us as Jaime, the seal scientist led Elaine, Maris and me through what looked like a crowded Florida beach of lounging seals. Jaime explained that they are mostly docile on the ice, but we needed to remember that they can move their 1000 lbs. with surprising speed and their canine teeth are the size of our index fingers. I am grateful that they not only tolerated our intrusion but also performed nicely for the microphone.

For more on seal research, check out…