Since Great Britain and Norway have dominated Antarctic exploration, Thanksgiving, a signature American holiday, doesn’t have a long heritage here on the icy continent. Americans were preoccupied with a decade or more of pre-Civil War turmoil when James Clark Ross arrived here in the mid 19th century to the place that would eventually bear his name-The Ross Sea, the Ross Ice Shelf, and Ross Island. It wasn’t until the arrival of the US Navy in the 1950s that turkey, stuffing, et al would plant its culinary flag at the bottom of the planet. Dian Belanger writes in her history of the US Antarctic Program that, in 1957, naval officers based at the South Pole Station faced yet another unforeseen challenge of this forbidding environment-how to bake a cake at 9,200 ft. above sea level? What is a polar cook to do? Well, they cranked up the HF radio and found an amateur radio enthusiast in Syracuse who called the Betty Crocker people at General Mills. I am not joking.

Unfortunately, they had never even considered such a question. These intrepid bakers at General Mills plunged into the question with the same gritty determination of the polar explorers that asked it. They loaded an oven into an airplane. They climbed to 10,000 ft. and baked a cake. Recommendations for the correct quantity of flour soon arrived at the South Pole.

The vagaries of Antarctic weather have delayed my departure, so it looks like I will be spending most of Thanksgiving Thursday in an LC-130 Hercules transport plane flown by the New Zealand Royal Air Force. I doubt if they will be serving turkey and cranberry sauce so I’ll bring a sandwich. The 8-hour flight will get me to ChristChurch, NZ. After dropping off all the cold weather gear that I borrowed from the National Science Foundation, if all goes well, I will be on the way home Friday morning through Sydney, Dallas, Washington DC, and eventually Rochester.

Since I won’t be home to cook the turkey, the least I can do is pass along some culinary inspiration from the great Antarctic explorer Ernest Shackleton. The items in these pictures are some of the 100-year old supplies from his hut at Cape Royds. I’m sure anything on these shelves doesn’t taste a day over 75 years old.

Happy Thanksgiving to all! 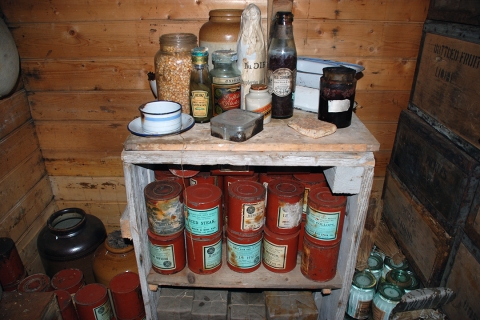 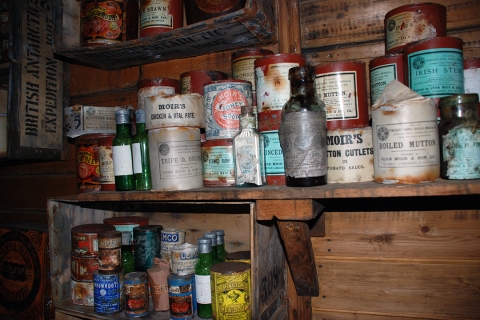