Four years ago, my godson Jonathan Canning stood beside me on a stage in El Sauce, Nicaragua, facing over 1,500 people. The most famous musician of Nicaragua, Carlos Mejia Godoy, called out to the crowd, “Because Glenn and Jonathan are here singing with us, it proves that whether you come from the US or Nicaragua, from Cuba, Canada, or Brazil, we are all brothers and sisters of America!” With a roar of applause, we launched into one of Carlos’ most famous songs, Nicaragua, Nicaraguita while every voice rose up with ours.

Last night, we produced the Third International Festival of Folklore with nearly 40 dancers, musicians and poets. Our three solid hours of traditional performing arts was the latest expression of many years of friendship and good work between the Enlace Project, SUNY Geneseo, and the people of Western NY and El Sauce. I am humbled to share the stage with generations of Sauceno performers that continue to pass along their art through the generations.

Last year, Jonathan’s brother James shared the stage with us at the end of his year of living, working, and playing music here. This year, my son Matteo is working with Enlace for eight months. It was his turn. The word on the street is that Matteo is a rather demanding English teacher, and, never missing an opportunity for instruction, he taught the audience the American gospel song, “I’ll fly away.” There are few things in the world that I enjoy more than playing back up to my children.  The other fatherly treat was having my daughter Francesca behind the camera, making her brother and dad look good. It’s hard work but someone has to do it. 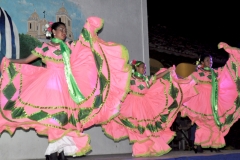 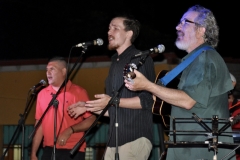 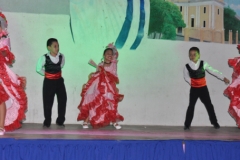 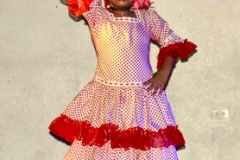 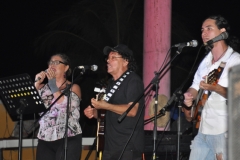 Let’s go back to the proclamation Carlos made four years ago. He said that we are all brothers and sisters of America. Nicaraguans are Americans. Chileans are Americans. Jamaicans are Americans. Canadians are Americans. Those of us born in the US are also, but not exclusively, Americans. We all share this part of the planet named for the explorer Amerigo Vespucci, but more importantly, we share a long and profound history that reaches back thousands of years. A couple weeks ago, we visited petroglyphs on the island of Ometepe that date back at least five thousand years. The arrival of Europeans about 450 years ago is only one small chapter and the 240 years of the United States represents an even shorter contribution. To Nicas, I am both “Americano” and “Estados Unidense,” or, in translaton, a “United States-er.” We occupy sacred ground that connects us to diverse, ancient people who have lived, died, loved, struggled, fought, celebrated, and built lives unique from any other continent on the planet. Carlos forces us to stretch our imaginations beyond our short-term memory to find our place in a bigger world.

Before coming here, I never thought much about Nicaragua. The word “Nicaragua” brought up sketchy images of war and corruption with the Iran-Contra Affair and vague Cold War fears of Communist infiltration from the late 1970s-early 80s. My only source was the TV news I watched as a teenager. Nicaraguans my age (like many I shared the stage with last night) saw the US as aggressors at that time. Their only source was the US-made ammunition that killed many of their family members and friends. It is astonishing to me that Carlos calls me “hermano” and he isn’t the only one. Over the last four years of playing music and teaching here, Nicaraguans have consistently left our painful, shared history behind in favor of a new chapter of friendship and opportunity. Many Nicas explain that our governments fought in the past but that doesn’t mean we need to fight today. If the tables of history were turned and Nicaragua had fought on our soil, I would hope that we United States-ers would be so forgiving.

Nicaragua, like Vietnam, doesn’t have to be defined by a war. Nicaragua is a country of natural beauty, gorgeous music, tasty food, and for my family, many dear friends that we will know for the rest of our lives.

Back in Geneseo, I know that I can always sit in with Jim Kimball’s Geneseo String Band or Ted Canning’s Panloco Steel Band. Here in El Sauce, I know that Jonathan, James, Matteo and I are always welcome to sit in with Alfredo Rivera’s Teocoyani as fellow brothers of America.